The Savage Detectives is an unconventional romp through the life of an uncompromising artist. Roberto Bolano extracts every delicious dribble of substance from the lives of his characters. He uses a variety of story telling techniques to craft a novel that is anything but ordinary. 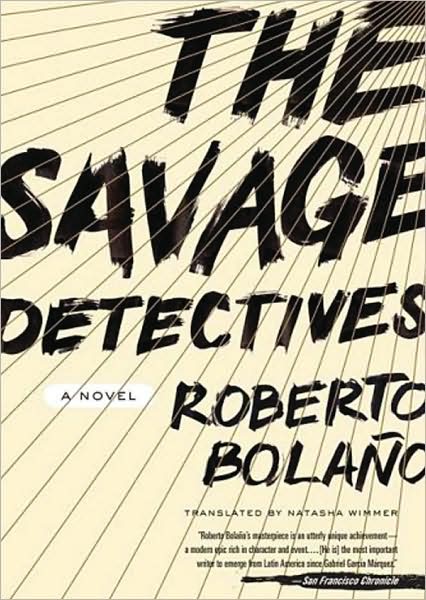 One sees the dusty streets of Mexico City and knows what it is like to feel the gnawing of hunger pangs in a back alley of Tel Aviv.  His description of a group of artists called “the Visceral Realists” brings to life the innermost secrets of an esoteric artistic cadre, the juice and dirt that we have all wanted to know, that every zeitgeist has experienced from the Beats to the eccentricities of the French Impressionists.  The passion of these individuals gives the outsider a true sense of what it must be like to be a Latin American artist.  These are individuals so mad to live their truth that they would sooner die than to kiss the hand of the establishment by engaging in the false realities of the masses.

One can hear the true Mexican yearning for modernity in the voices of his numerous story tellers. He starts the book by describing the life of a curious, young, aspiring poet named Garcia Madero who is a Chilean in Mexico City. Madero meets the Visceral Realists and is soon enchanted by how they work and live and he falls into the depths of this unique underground of Mexico City.

The first section of the book is written in the style of a novella then abruptly drops the reader into a new form where individuals give first-hand accounts similar to oral histories. These span cities throughout the Americas and the old countries. Bolano also utilizes the literary forms of personal memoir and poetry, but he does this so masterfully that the work feels organic rather than just like a series of mannered devices.  The entire book is nothing less that ground-shattering.

The passion of the author seeps out from the page and becomes embedded in the mind of the reader.  Bolano deftly encompasses the emotions of artists in many different stages and walks of life from the peasant poet recounting the story of an old flame that had left him in the 1950s to the want-to-be, wealthy, egocentric lawyer-patrons who financially back the books and magazines that hold the coveted golden key to publication for the hungry young unpublished poets.

Numerous times while reading the book I was so impassioned by the burning desires of his characters to write poetry that I myself wished to drop the book and take up the pen to write poems just for the sheer exhilaration of creating one.  The anecdotes could not be more fantastical, exemplified by the story of a Chilean who leaves his homeland on a hunch in the hull of a slow boat to Spain only to gain fame by winning a soccer pool against improbable odds because he is simply haunted by the winning numbers.   What shines most brightly in this piece is Bolano’s unorthodox sense of humor, constantly begging the reader to turn the page and gently reminding us that poetry, like life, should not be taken too seriously.

Artists are often catalysts, ushering societies into a new era.  One learns first hand from the group of Visceral Realists the parts of Mexican politics and the practices of the establishment that need to be cast aside in order for Mexico to progress towards a better  nation as a whole.  Whether one of his characters is giving a sardonic critique of a Mexican painter for his lack of intellectual depth in choosing subject matter or chastising the hotly debated Octavio Paz for drinking from the government’s coffers, characters are constantly challenging the status quo in hopes of seeing a brighter future for their countrymen.  I believe that from this work of fiction alone I got a better sense of what it means to be Chilean. I got the real flavor of the tragedy of Mexican history.

One can taste the empanadas del horno of Spain and feel the heat rise from a table of jumbled tequila glasses as people talk about the literary politics of the day. With Bolano’s inventive and varied approach one is never far from the fray at Café Quito.

Another aspect of the artist’s existence that is exuberantly explored is the act of stealing what is coveted. Whether it is a book of poems that a central character, Garcia Madero, cannot afford or the style of a 16th French master that a young poet attempts to emulate–as Stravinsky once said, “A good composer (artist) does not imitate, he steals.”  In this book both the author and the characters he creates do both, but they prefer the latter.

The underlying ethic that an artist should be true to his craft by being true to his heart is what drives this gem of an epic novel.  In his characters as in his own life, Roberto Bolano would always teeter on the precipice of disaster in order to preserve the authenticity of his work.  For many years he lived the life of a pauper in order to give his full being to his art, scattering his rotten teeth across the globe. His unwillingness to compromise his work at the ultimate price makes the product so authentic that the reader can feel it.  Although many have tried to copy his tone and style, few can capture the visceral reality of his work, for to do that one must live the life of the artist.

The Savage Detectives is a valuable tool for anyone wishing to gain a better grasp of Latin American history, but it is far more than that.  This book is indispensable to any young writer who wishes to learn about the proper employment of multiple styles as well as the elusive art of blending humor into prose. I believe it is a welcome addition to the bookshelf of any jaded reader who is desperately searching for a breath of literary fresh air.  For me, this has been a paradigm shifting piece in how I view reading and writing the novel as a form and an introduction to a sage whose work I will undoubtedly cherish for the rest of my life.

Next: Celebrity Death And Understanding Mortality